THE NOW WORD ON MASS READINGS
for September 24th, 2014 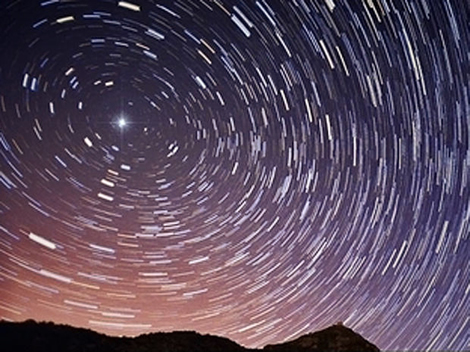 IT is called the “Guiding Star” because it appears to be fixed in the night sky as an infallible point of reference. Polaris, as it’s called, is nothing less than a parable of the Church, which has its visible sign in the papacy.

Clearly, when Jesus said to Peter that He was giving Him the “keys of the kingdom” [1]Matt 16:19 with the temporal power to bind and loose, setting Him as the one to “Feed my sheep,” [2]John 21:17 Our Lord was drawing straight from Isaiah 22 where Eliakim is set over David’s kingdom:

I will clothe him with your robe, gird him with your sash, confer on him your authority. He shall be a father to the inhabitants of Jerusalem, and to the house of Judah. I will place the key of the House of David on his shoulder; what he opens, no one will shut, what he shuts, no one will open. I will fix him as a peg in a firm place… (Isaiah 22:21-23)

The office of Peter has become like that infallible Guiding Star, fixed in the history of mankind as a reference point to the “truth that sets us free.”

The Pope, Bishop of Rome and Peter’s successor, “is the perpetual and visible source and foundation of the unity both of the bishops and of the whole company of the faithful.” —Catechism of the Catholic Church, n. 882

How fixed is the office of Peter, which has been known to be occupied at times by scoundrels?

No popes in the history of the Church have ever made ex cathedra errors. —Rev. Joseph Iannuzzi, theologian of the Gregorian Pontifical University, private letter

This is why, brothers and sisters, for all the shrill and panic, accusation and condemnation, hasty assumptions and creeping doubts that many are expressing over Pope Francis, the Word of God has the last say. Christ declared Peter to be rock, not Simon. He is “fixed like a peg” in Christ’s mystical structure. The fact remains that Pope Francis has not changed a single letter of the deposit of faith ex cathedra. Nor, based on Christ’s Word, have we any reason to believe he will or can.

There are signs that the upcoming Synod on the Family could very well wreak havoc and division as some of the hierarchy seek to make the laws of God more “pastoral.” But don’t be fooled. You see, it is actually the truth that is fixed in the heavens like Polaris, and the Church and the Holy Father are merely Christ’s infallible representatives of it.

Your word, LORD, stands forever; it is firm as the heavens. (Today’s Psalm)

Jesus said the Kingdom belongs to the “little ones,” not the theologians (unless the theologians becomes like “little children”). [3]cf. Luke 18:16 What is necessary is to faithfully adhere to what is recorded in the oral and written Tradition of the Catholic Church and has been faithfully passed on to our very day.

Add nothing to his words, lest he reprove you, and you will be exposed as a deceiver. (First reading)

This complete dependence and trust in Christ’s Word was modeled by the Apostles in today’s Gospel. They took “nothing for the journey” except His clear instructions—and bore powerful fruit while relying entirely upon His providence.

Every word of God is tested; he is the shield to those who take refuge in him. (First reading)

This is the kind of simplicity that you and I must return to (and that Christ now insists upon): a people who are in love with Him, faithful to His Word, walking neither to the left nor to the right, but on the well-trodden path of our Sacred Tradition. It is the path of martyrdom in all its varied forms.

Brothers and sisters, it is twilight now, but soon, it will be midnight. Make today’s Psalm response more than a mechanical response, but a motto:

Your word, O Lord, is a lamp for my feet.

And as Mary is a mirror of the Church, [4]cf. The Masterwork and Key to the Woman let us also turn our inner compass toward her, the “Star of the New Evangelization.” [5]Title St. John Paul II gave to Our Lady of Guadalupe

Whoever you are that perceive yourself during this mortal existence to be rather drifting in treacherous waters, at the mercy of the winds and the waves, than walking on firm ground, turn not away your eyes from the splendor of this guiding star, unless thou wish to be submerged by the storm. Look at the star, call upon Mary. … With her for guide, you shall not go astray, while invoking her, you shall never lose heart … if she walks before you, you shall not grow weary; if she shows you favor, you shall reach the goal. —St. Bernard of Clarivaux (Hom. Super Missus Est, II, 17)