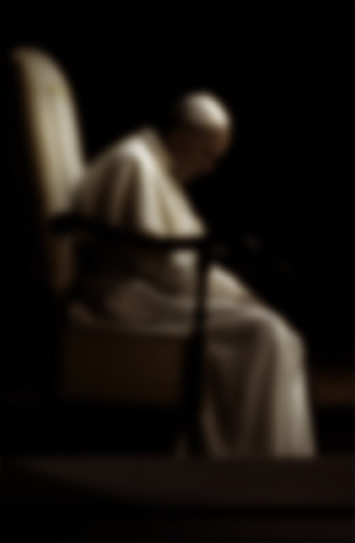 THE media continues to roll out its rather brutal comparisons between Pope Francis and Pope Emeritus Benedict. This time, Rolling Stone magazine has jumped into the fray, describing Francis’ pontificate as a ‘Gentle Revolution,’ whilst stating that Pope Benedict is…

…a staunch traditionalist who looked like he should be wearing a striped shirt with knife-fingered gloves and menacing teenagers in their nightmares. —Mark Binelli, “Pope Francis: The Times They Are A-Changin'”, Rolling Stone, January 28th, 2014

Well, we’ve heard enough in the course of Francis’ short pontificate to get a sense of his pastoral direction. So, just for fun, let’s take a look at the quotes below, and take a guess at who said them—Francis or Benedict?

I. The Church does not engage in proselytism. Instead, she grows by “attraction”…

II. It is necessary to go to the very fringes of society to take to everyone the light of Christ’s message about the meaning of life… and loving them with the love of the Risen Christ.

III. capitalism… promised to point out the path for the creation of just structures, and they declared that these, once established, would function by themselves… the distance between rich and poor is growing constantly, and giving rise to a worrying degradation of personal dignity….

IV. The poor living in the outskirts of the cities or the countryside need to feel that the Church is close to them… The Gospel is addressed in a special way to the poor…

V. …the gray pragmatism of the daily life of the Church, in which all appears to proceed normally, while in reality faith is wearing down and degenerating into small-mindedness.

VI. Religious freedom… includes the freedom to choose the religion which one judges to be true and to manifest one’s beliefs in public.

VII. …love of neighbour is a path that leads to the encounter with God… closing our eyes to our neighbour also blinds us to God.

VIII. We must not yield to the temptation of relativism or of a subjective and selective interpretation of Sacred Scripture.

IX. God is not far from us, he is not somewhere out in the universe, somewhere that none of us can go. He has pitched his tent among us…

XI. Love becomes truly Christian only when it is given to everyone without counting the cost.

XII. How could the idea have developed that Jesus’s message is narrowly individualistic and aimed only at each person singly… a selfish search for salvation which rejects the idea of serving others?

XIII. This is a point that every Christian must understand and apply to himself or herself: only those who first listen to the Word can become preachers of it.

That’s right. When Francis was apparently watering down the faith, he was actually quoting the “authoritarian” Benedict when he said that the Church must not engage in “proselytism”. [2]Oct. 1st, 2013; ncronline.org He 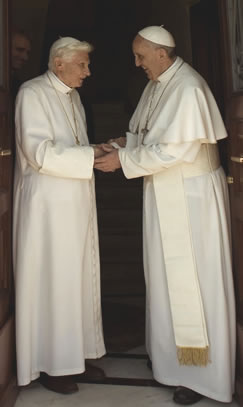 was echoing his “rigid” predecessor when he said that the Church at times has locked itself up in ‘small-minded rules.’ [3]Sept. 30th, 2013, americamagazine.org He was repeating Benedict’s criticism that “unbridled capitalism” has led to the exploitation of the person. [4]May 22, 2013; catholicherald.co.uk He was affirming his “monstrous” predecessor when he said we must reach to the fringes of humanity. [5]Evangelii Gaudium, n. 46 Francis was also echoing Benedict that we must respect other’s religions as a mutual ground for evangelization. [6]Aug. 7, 2013; catholicnews.com He was quoting Benedict when he said that a ‘dictatorship of relativism’ endangers the coexistence of peoples. [7]Mar 22, 2013; catholicsnews.com And of course, Francis was preaching in complete harmony with Benedict in the numerous times he has addressed God’s love for us, and the immutable call to love others [8]cf. Evangelii Gaudium — a love which cannot be ‘privatized and individualistic.’ [9]cf. Evangelii Gaudium, n. 262

The idea that Pope Francis is a dramatic departure from his predecessors is a myth. That they each have their own personalities and way of expressing the Gospel is what makes their consistent message so convincing and powerful. The Church has taught the same thing for 2000 years, and Christ will not let that change.

Pope Francis may appear to cross the line of modernism and moral relativism, but only because some Catholics are reading Rolling Stone and the like instead of the recent papal encyclical, apostolic exhortation, or Catechism to understand their faith.

REMADE IN THEIR OWN IMAGE

The world wants a rock star for a pope—part of the systemic sickness in our culture that is longing for heroes because we have produced so many zeroes; a culture that, having forsaken worship in God, 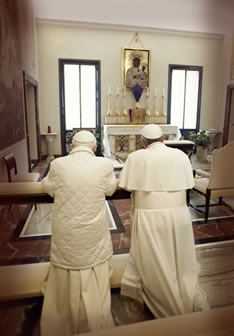 now turns to the worship of the creature. And so, the liberal media is ready to remake anyone in their own image.

They believe they have found another star in Pope Francis, in his “gentle revolution.” But they are mistaken. There is nothing gentle about the Cross. [10]cf. Lk 16:16 Pope Francis has laid out a pastoral vision that picks up exactly where his predecessor left off, who demonstrated caritas in veritate — ‘love in truth’. And now, Francis is completing the circle by demonstrating truth in love. Jesus revealed that He was truth by loving everyone—everyone, without exception. And that love brought about His Passion, because He was still “the truth.” [11]cf. Pope Francis, and the Coming Passion of the Church Part I and Part II The Francis Revolution is one that calls for a radical self-renunciation and “yes” to God—a “yes” that always passes through the Cross. [12]cf. Lk 9:23

Francis remains firmly upon the truth, despite what others think. This was made clear again recently as he spoke to the very Congregation that Cardinal Joseph Ratzinger headed up (that led to the disparaging title: “the German Rotweiller”) before becoming Pope Benedict. 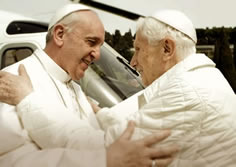 service offered to the Magisterium of the Pope and the whole Church… to safeguard the right of the whole people of God to receive the deposit of faith in its purity and in its entirety. —POPE FRANCIS, Address to the Congregation for the Doctrine of the Faith, January 31, 2014; vatican.va

Pope Benedict pledged his “respect and obedience” to Francis [13]catholicnewsagency.com who in turn called Benedict “my much-loved predecessor,” [14]cf. catholicnews.com saying that they are “brothers.” [15]cf. cbc.ca For in following one another, they are following Christ.

Who said that? Jesus.

To also receive Mark’s daily Mass meditations, The Now Word,
click on the banner below to subscribe.
Your email will not be shared with anyone.

Spiritual Food for Thought is a full-time apostolate.
Thanks for your support! We will have an update shortly
on our 1000 donors campaign…