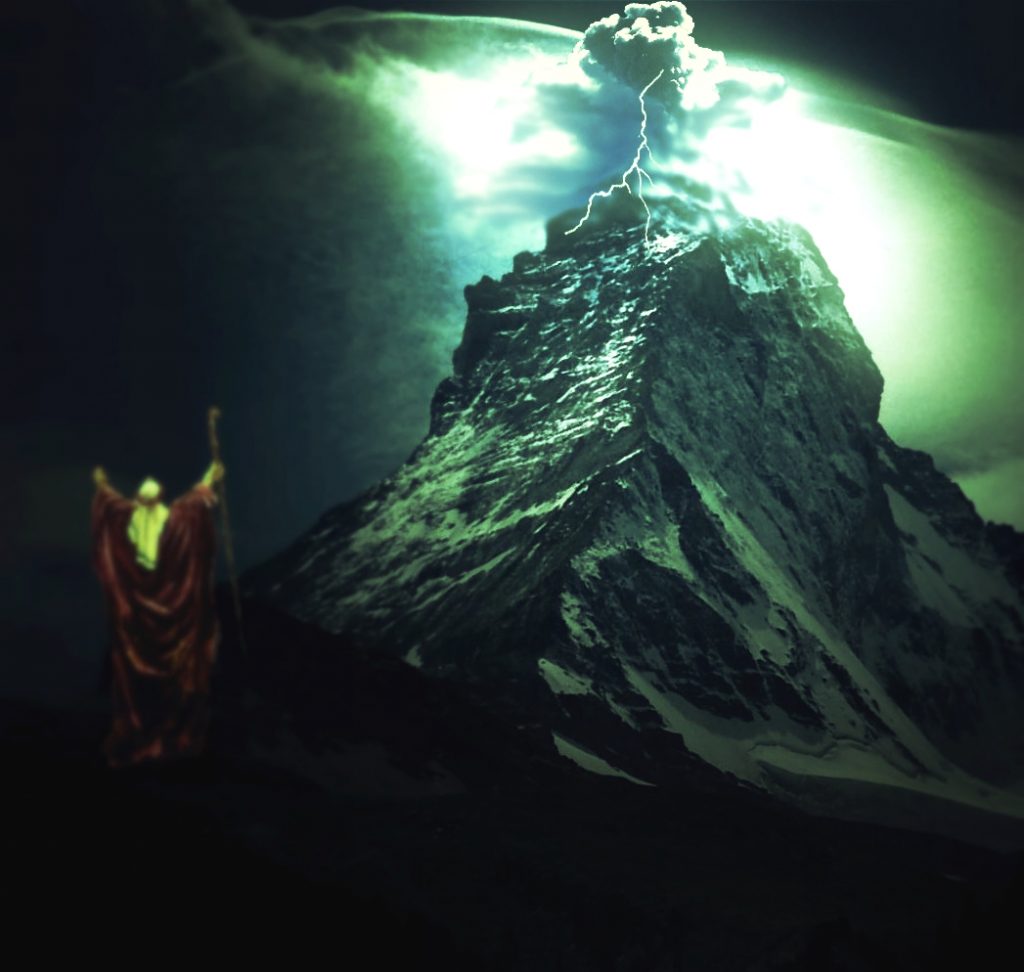 THERE is a crisis coming—and it is already here—for our Protestant brothers and sisters in Christ. It was foretold by Jesus when He said,

…everyone who listens to these words of mine but does not act on them will be like a fool who built his house on sand. The rain fell, the floods came, and the winds blew and buffeted the house. And it collapsed and was completely ruined. (Matt 7:26-27)

That is, whatever is built on sand: those interpretations of Scripture that depart from the Apostolic faith, those heresies and subjective errors that have divided Christ’s Church literally into tens of thousands of denominations—is going to be washed away in this present and coming Storm. In the end, Jesus foretold, “there will be one flock, one shepherd.” [1]cf. John 10:16

For the present divisions between the body of Christ are a scandal to believers and the world alike. While we can find common ecumenical ground between Christians through our baptism and faith in Jesus Christ as Lord and Savior, we must also admit that our unity eventually breaks down when the sword of truth is fully withdrawn from its sheath. How can we ever resolve these differences in interpretation between the various denominations? The answer is that the doctrines which divide us have already been resolved.

I am coming to you in a dense cloud, so that when the people hear me speaking with you, they may always have faith in you also.

This is an extraordinary revelation from the Lord—one that prefigures the coming importance of the episcopate founded on the twelve Apostles. For here, God is revealing the importance of mere men in the transmission of His Word. I mean, why would Moses even be necessary? Exodus details how when the Lord came down upon Mount Sinai, there was thunder, lightning, billowing smoke, a great shaking, and even a trumpet blast that grew louder and louder. At this point, Moses, I would think, pretty much faded from the minds of the terror-stricken Israelites. Yet, God did this on purpose, in part He says, to bolster Moses’ authority.

For the Lord did not intend to continue revealing his glory and majesty through signs and wonders. Rather, He would reveal his glory through the revelation of His Word, that is, the Ten Commandments and the Law. As Moses would later say,

…what great nation has statutes and ordinances that are as just as this whole law which I am setting before you today? (Deut 4:8)

You see, some Evangelical Christians believe that the glory and revelation of God can be sought alone in signs and wonders—speaking in tongues, miracles, praise and worship music, bible studies, prayer meetings, etc. And indeed, in certain seasons and occasions in our lives, God manifests His tender love, mercy, and presence to us in these ways. But just as the spectacle of Mount Sinai would come to an end and the Israelites would be left only with Moses in all of his humanity, so too, the powerful manifestations of the Spirit fade and the Christian will find himself, no longer at the foot of the mountain of subjective emotion, but at the feet of the Apostles (and their successors) in all their humanity. Here, one must fold the wings of his emotions, you could say, and open the intellect to the truths they propose. For Jesus said, “I am the way, the truth, and the life.”

His way of love, guided by truth, is alone the means to life.

If I speak in human and angelic tongues… and if I have the gift of prophecy and comprehend all mysteries and all knowledge; if I have all faith so as to move mountains but do not have love, I am nothing. (1 Cor 13:1-2)

And yet, how can we know what “love” is without infallible truth to guard and guide it from the subtle poison of subjectivity and emotion, of false prophets and the fickleness of “majority opinion”? The answer is an infallible Church.

So, tell me brothers and sisters, what would give mere men more credibility to you: a volcano and a trumpet blast, or the “Word made flesh” himself charging the Apostles with the task of preaching the infallible truths of the Gospel?

Go, therefore, and make disciples of all nations, baptizing them in the name of the Father, and of the Son, and of the holy Spirit, teaching them to observe all that I have commanded you… Whoever listens to you listens to me. Whoever rejects you rejects me… when he comes, the Spirit of truth, he will guide you to all truth… Therefore, brothers, stand firm and hold fast to the traditions that you were taught, either by an oral statement or by a letter of ours… [for] the household of God, which is the church of the living God, [is] the pillar and foundation of truth.” (Matt 28:19-20, Lk 10:16, Jn 16:13, 2 Thess 2:15, 1 Tim 3:15))

My Evangelical brother and sisters, do you speak in tongues? So do I. Do you raise your hands in praise and worship? So do I. Do you lay them upon the sick and pray for their healing? So do I. Do you love the Bible and the Word of God? So do I. But I tell you, with all my heart and all my love, there is nothing in the Bible that speaks one word about interpreting God’s Word apart from the Church, apart from Apostolic authority. This was clearly and absolutely understood by the early Church. Why? Because there was not even a “bible” for the first four hundred years of her existence. Rather, as we hear in the Gospel today, Jesus entrusted the truth, not to the throngs, but to twelve men and to their successors through apostolic succession. [2]cf. Acts 1:20; 14:13; 1 Tim 3:1, 8; 4:14, 5:17; Tit 1:5

Because knowledge of the mysteries of the Kingdom of heaven has been granted to you, but to them it has not been granted. (Today’s Gospel)

…let us note that the very tradition, teaching, and faith of the Catholic Church from the beginning, which the Lord gave, was preached by the Apostles, and was preserved by the Fathers. On this was the Church founded; and if anyone departs from this, he neither is nor any longer ought to be called a Christian…. —St. Athanasius, 360 A.D., Four Letters to Serapion of Thmius 1, 28

Those are strong words that, today, in light of the schisms that have occurred, require some context for those who, through no fault of their own, don’t subscribe completely to Catholicism.

“The Church knows that she is joined in many ways to the baptized who are honored by the name of Christian, but do not profess the Catholic faith in its entirety or have not preserved unity or communion under the successor of Peter.” Those “who believe in Christ and have been properly baptized are put in a certain, although imperfect, communion with the Catholic Church.”—CCC, n.838

Of course, as Catholics, we must admit that, in many places, our parishes are not attractive for a number of reasons. Just as Moses, despite his charge, was a sinful man, so too, the leaders of the Church have been and are imperfect and sinful men. In fact, today the credibility of the Church and her leadership has never been so wounded and endangered by her sins. I pity Evangelical Christians in some ways because in entering into Catholicism and “the fullness of truth”, they must often leave behind lively Christian communities, anointed preaching, and powerful music. And yet, we continue to see a stream of Protestants entering the Catholic Church? Why? Because as important as good music, good preaching, and community are, it is the truth that sets us free.

The teaching of the Church has indeed been handed down through an order of succession from the Apostles, and remains in the Churches even to the present time. That alone is to be believed as the truth which is in no way at variance with the ecclesiastical and apostolic tradition. —Origen (185-232 A.D.), Fundamental Doctrines, 1, Pref. 2

That fullness of truth can be found, despite her weaknesses, sinfulness and scandals, in the Catholic Church (and Truth is really and truly present in the Eucharist). Oh yes! The present and coming Storm will purify the Catholic Church too—more than anyone else. And when the night of tribulation is over and that happy hour comes when the Bride of Christ is purified and her satanic divisions crushed beneath the heel of a Woman, she will once again be evangelical, pentecostal, catholic, sacramental, apostolic and holy as Christ intended. She will at last collect the shattered beams of light that division has scattered, and become a single beacon of truth “as a witness to all nations, and then the end will come.” [3]cf. Matt 24:14

The Church is the place where humanity must rediscover its unity and salvation. —Catechism of the Catholic Church, n. 845

…when the trial of this sifting is past, a great power will flow from a more spiritualized and simplified Church. Men in a totally planned world will find themselves unspeakably lonely. If they have completely lost sight of God, they will feel the whole horror of their poverty. Then they will discover the little flock of believers as something wholly new. They will discover it as a hope that is meant for them, an answer for which they have always been searching in secret. And so it seems certain to me that the Church is facing very hard times. The real crisis has scarcely begun. We will have to count on terrific upheavals. But I am equally certain about what will remain at the end: not the Church of the political cult… but the Church of faith. She may well no longer be the dominant social power to the extent that she was until recently; but she will enjoy a fresh blossoming and be seen as man’s home, where he will find life and hope beyond death. —Cardinal Joseph Ratzinger (POPE BENEDICT XVI), Faith and Future, Ignatius Press, 2009

The Church is “the world reconciled.” —Catechism of the Catholic Church, n. 845

“And they shall hear my voice, and there shall be one fold and one shepherd.” May God… shortly bring to fulfillment His prophecy for transforming this consoling vision of the future into a present reality… It is God’s task to bring about this happy hour and to make it known to all… —POPE PIUS XI, Ubi Arcani dei Consilioi “On the Peace of Christ in his Kingdom”, December 23, 1922

Amen, I say to you, many prophets and righteous people longed to see what you see but did not see it, and to hear what you hear but did not hear it. (Today’s Gospel)

Dynasty, not Democracy: Part I and Part II

The Unfolding Splendor of Truth

Seven Part series on the role of the Charismatic Renewal: Charismatic?

We are so grateful for your prayers and support!