THE NOW WORD ON MASS READINGS
for Friday of the Third Week of Lent, March 13th, 2015 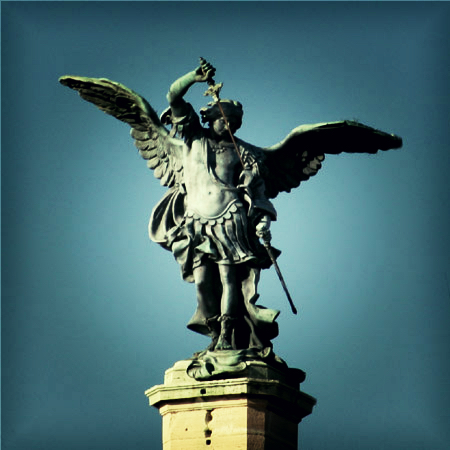 THERE is a legendary account of a pestilence that broke out in Rome in 590 A.D. due to a flood, and Pope Pelagius II was one of its numerous victims. His successor, Gregory the Great, ordered that a procession should go around the city for three consecutive days, imploring God’s help against the disease.

As the procession passed by the tomb of Hadrian (a Roman Emperor), an angel was seen hovering over the monument and sheathing the sword he held in his hand. The apparition caused universal rejoicing, believed to be a sign that the plague would come to an end. And so it was: on the third day, not a single fresh case of the sickness was reported. In honor of this historic fact, the tomb was re-named Castel Sant’Angelo (Castle of St. Angelo), and a statue was erected upon it of an angel sheathing his sword. [1]from Anecdotes and Examples for the Catechism, by Rev. Francis Spirago, p. 427-428

In 1917, the children of Fatima had a vision of an angel with a flaming sword about to strike the earth. [2]cd. The Flaming Sword Suddenly, Our Lady appeared in a great light that extended toward the angel, whose chastisement was postponed. Twenty years later, in 1937, St. Faustina had a vision confirming the divine pause:

I saw the Lord Jesus, like a king in great majesty, looking down upon our earth with great severity; but because of His Mother’s intercession He prolonged the time of His mercy…the Lord answered me, “I am prolonging the time of mercy for the sake of [sinners]. But woe to them if they do not recognize this time of My visitation.” —Divine Mercy in My Soul, Diary, n. 126I, 1160

The angel with the flaming sword on the left of the Mother of God recalls similar images in the Book of Revelation. This represents the threat of judgment which looms over the world. Today the prospect that the world might be reduced to ashes by a sea of fire no longer seems pure fantasy: man himself, with his inventions, has forged the flaming sword.—Cardinal Ratzinger (POPE BENEDICT XVI) The Message of Fatima, from www.vatican.va

The reason we have reached this threshold of justice again is that we have wandered far, very far, from the first commandment:

Again, I agree with St. John Paul II who said,

Through your prayers and mine, it is possible to alleviate this tribulation, but it is no longer possible to avert it, because it is only in this way that the Church can be effectively renewed… We must be strong, we must prepare ourselves, we must entrust ourselves to Christ and to His Mother, and we must be attentive, very attentive, to the prayer of the Rosary. —POPE JOHN PAUL II, interview with Catholics at Fulda, Germany, Nov. 1980; www.ewtn.com

One way we can alleviate the trials that are here and coming is to participate in the Pope’s “24 Hours for the Lord”, a worldwide call to Adoration and the Sacrament of Confession today and tomorrow: [4]cf. www.aleteia.org

As individuals, we are tempted by indifference. Flooded with news reports and troubling images of human suffering, we often feel our complete inability to help. What can we do to avoid being caught up in this spiral of distress and powerlessness? First, we can pray in communion with the Church on earth and in heaven. Let us not underestimate the power of so many voices united in prayer! The 24 Hours for the Lord initiative, which I hope will be observed on March 13-14 throughout the Church, also at the diocesan level, is meant to be a sign of this need for prayer. —POPE FRANCIS, March 12th, 2015, aleteia.com

We cannot be instruments of hope if we are people of despair! We need to trust in God’s providence and keep our eyes fixed on the Triumph that is coming—that day when the Lord will say of the New Israel, who is the Church:

If only my people would hear me, and Israel walk in my ways, I would feed them with the best of wheat, and with honey from the rock I would fill them. (Today’s Psalm)

So, What Time Is It?

Time of Grace… Expiring? Part I, II, and III