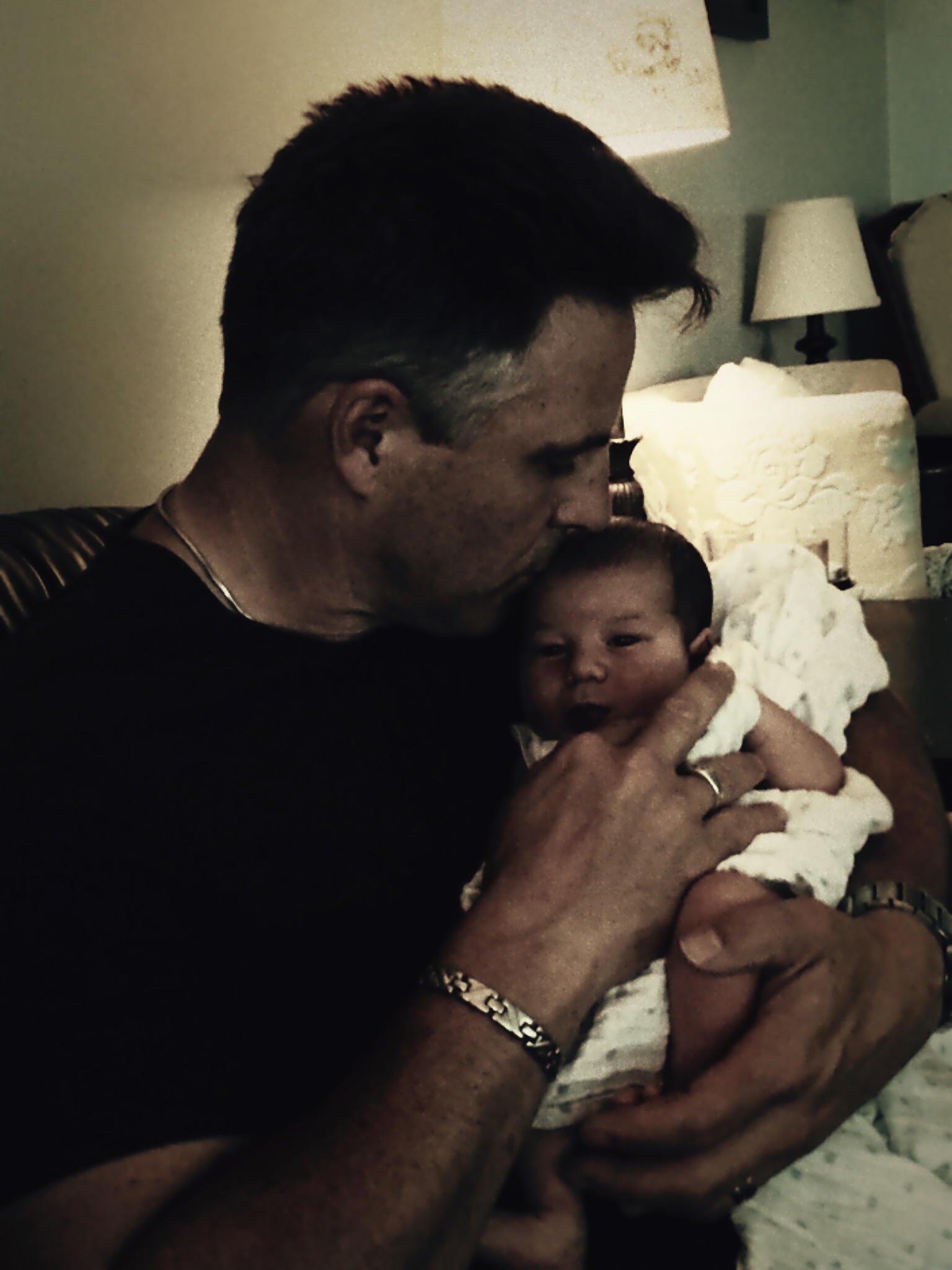 IT was a long labor, but at last the ping of a text broke the silence. “It’s a girl!” And with that the long wait, and all the tension and worry that accompanies child birth, was over. My first grandchild was born.

My sons (the uncles) and I stood in the waiting room of the hospital as the nurses wrapped up their duties. In the room next to us, we could hear the wailing and cries of another mother in the throws of hard labor. “It hurts!” she exclaimed. “Why isn’t it coming out??” The young mother was in complete distress, her voice ringing with desperation. Then at last, after several more cries and groans, the sound of new life filled the corridor. Suddenly, all the pain of the previous moment evaporated… and I thought of the Gospel of St. John:

When a woman is in labor, she is in anguish because her hour has arrived; but when she has given birth to a child, she no longer remembers the pain because of her joy that a child has been born into the world. (John 16:21)

The same Apostle, while exiled on the island of Patmos, would later see in a vision:

A great sign appeared in the sky, a woman clothed with the sun, with the moon under her feet, and on her head a crown of twelve stars. She was with child and wailed aloud in pain as she labored to give birth. (Rev 12:1-2)

It was a vision that symbolized both the Mother of God and the People of God, most especially the Church. St. Paul would later describe the future labors of the Church in the same terms:

We are, brothers and sisters, on the verge of the “day of the Lord”, which the Church Fathers taught as not a 24 hour day, but a period of time that they pinpointed to the symbolic “thousand years” in Revelation 20, a period that would be preceded by the “labor pains” brought on by the machinations and persecutions of a “beast” who would rise to ultimately divide humanity. Pope Benedict warned that this hour was indeed emerging…

…without the guidance of charity in truth, this global force could cause unprecedented damage and create new divisions within the human family… humanity runs new risks of enslavement and manipulation. —Caritas in Veritate, n.33, 26

As I noted in Interpreting Revelation and Why Aren’t the Popes Shouting?several pontiffs have openly compared our times, particularly the “culture of life” versus the “culture of death”, to the battle between the woman and the dragon in Revelation 12 which immediately precedes the arrival of an antichrist. As I wrote in Is Jesus Coming?, even though several contemporary authors and the popular opinion of many in the Church today is that the Antichrist only arrives near the very end of the world, this theological opinion is beginning to fall apart under the more careful scrutiny of the Early Church Fathers, approved apparitions and locutions, and notably, the signs of the times. I don’t really care if I’m in the “minority” of thinkers in this regard; what I care about is whether or not what is taught here for the past ten years is consistent with 2000 years of Tradition and is consonant with what God is saying to the Church at this hour through His prophets, chiefly, the Mother of God. They should be in harmony, and they indeed are. But in pointing this out, I have watched some contemporary authors literally devolve into a fit of rage and calumny against me for standing by the teachings here. When their book sales are on the line, I suppose it becomes personal.

Nonetheless, the purpose of this website is to draw you deeper into the mystery and reality of God’s mercy and thus to bring readers into a personal encounter with Jesus Christ. There are, to be certain, many writings that deal with the signs of the times and eschatology. But I hope my new readers will understand that they are only intended to give you a context at this hour, the Great Context: preparation for the return of Jesus to establish a universal reign of peace. This, I must repeat again, is not the return of Jesus in the flesh, but a pneumatic coming of Christ in Spirit to reign in the hearts of His saints. This “new Pentecost” has been prayed for by Popes, prophesied by Mary, and announced by Saints.

I believe our understanding of what is coming has only been unfolding in these times. For as St. Michael the Archangel said to the prophet Daniel regarding his vision of the end times:

“Go, Daniel,” he said, “because the words are to be kept secret and sealed until the end time. Many shall be refined, purified, and tested, but the wicked shall prove wicked; the wicked shall have no understanding, but those with insight shall. (Daniel 12:9-10)

And so, as we enter more deeply into the purification of the Body of Christ, so too is our understanding and insight of the trials and triumphs at hand increasing.

As I held my granddaughter for the first time today, I felt inspired to remind all of you to “look up”.

Neither Donald Trump, Hillary Clinton, Vladimir Putin, or any other man or woman will be able to stop what has now begun in motion: that is, the labor pains that will usher in God’s judgment and an Era of Peace.

Speak to the world about My mercy; let all mankind recognize My unfathomable mercy. It is a sign for the end times; after it will come the da y of justice. —Jesus to St. Faustina, Divine Mercy in My Soul, Diary, n. 848

This “day of justice” is another way of saying the “day of the Lord.”

…this day of ours, which is bounded by the rising and the setting of the sun, is a representation of that great day to which the circuit of a thousand years affixes its limits. —Lactantius, Fathers of the Church: The Divine Institutes, Book VII, Chapter 14, Catholic Encyclopedia; www.newadvent.org

Our Lord himself indicates to Faustina that the day of the Lord will inaugurate a temporal universal peace once man casts off the shackles of the new Communism that is rising, and embraces His salvation.

Mankind will not have peace until it turns with trust to My mercy. —Divine Mercy in My Soul, Jesus to St. Faustina, Diary, n. 300

Those words indicate to us that the “labor pains” have really only begun. But already, as the culture of death expands, religious freedom wanes, and the Islamic Jihad rises, we can see that the hard labor is nearing. So you must be prepared, my beloved friends, for great tribulations are to unfold here in the West very soon. They have already begun, and they will engulf the whole world, changing the course of the future forever.

But you, brothers, are not in darkness, for that day to overtake you like a thief. For all of you are children of the light and children of the day. We are not of the night or of darkness. Therefore, let us not sleep as the rest do, but let us stay alert and sober. (1 Thess 5:4-6)

As I have said to you from the very beginning of this writing apostolate, we “stay alert and sober” by remaining in a state of grace, of detachment and prayer (see Prepare!). Really, this is just another way of saying: have a deep personal relationship with the Father, Son, and Holy Spirit always and everywhere. Were the world ending tomorrow, I would tell you the same thing. What is essential is to live in childlike faith and joy each moment of your life, no matter the context, and you will most certainly be prepared to meet the Lord whenever that moment comes.

And yet, we cannot ignore the times around us as though life is going to go on the same as it always has. Such a soul is like the five foolish virgins who were unprepared when the call came at midnight to meet the bridegroom. No, we must also be wise. And we must also remain in a state of hope. Indeed, the future of my granddaughter and our children is not one of gloom but of great hope… even if for now, we must pass through this Storm.

…but when she has given birth to a child, she no longer remembers the pain because of her joy that a child has been born into the world. (John 16:21) 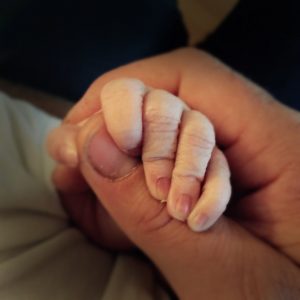 The Great Refuge and Safe Harbour

The Day of the Lord

Why an Era of Peace?

The Vindication of Wisdom

The Popes, and the Dawning Era