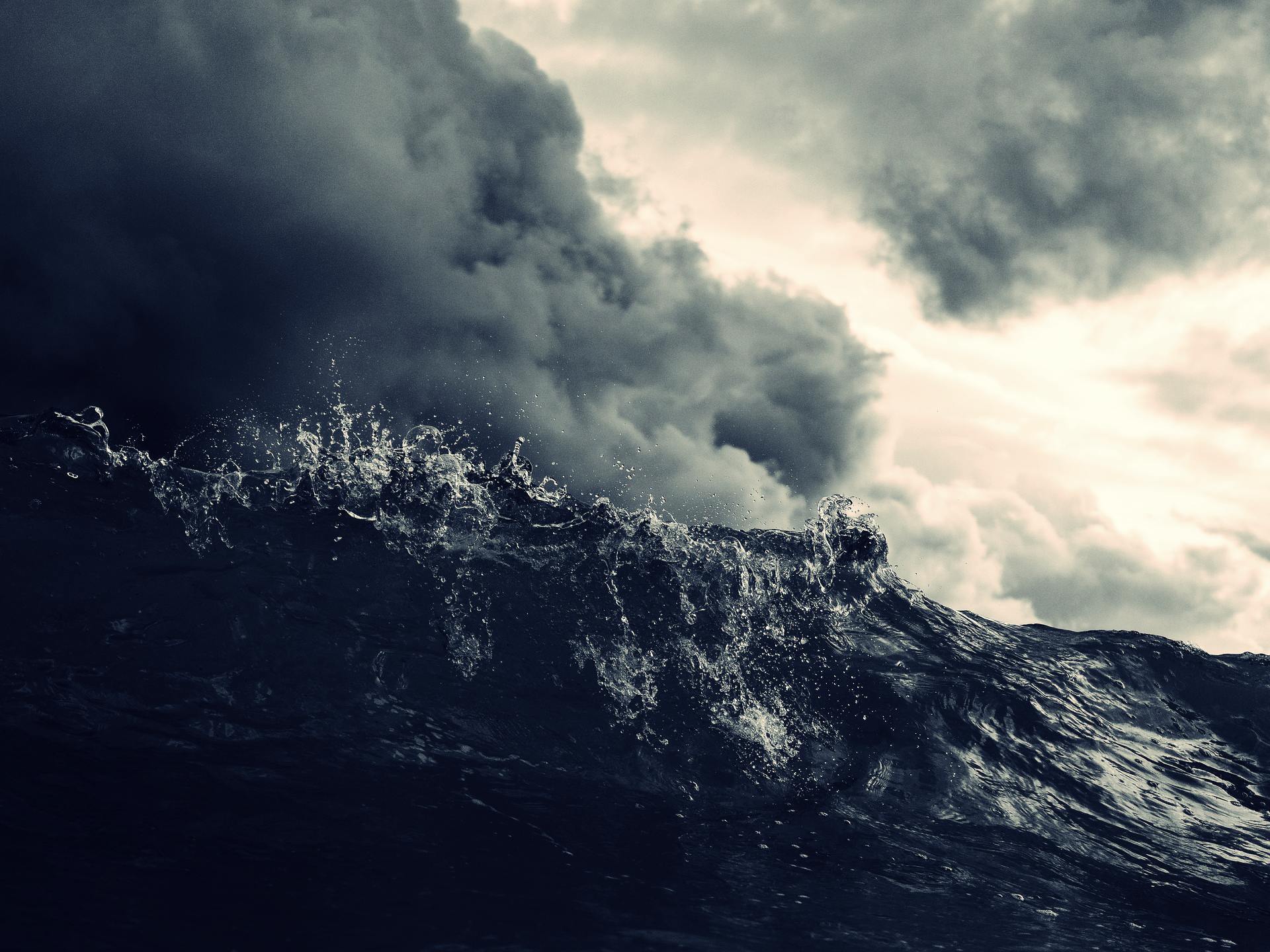 AS I was praying before the Blessed Sacrament this past weekend, I felt Our Lord’s intense grief — sobbing, it seemed, that mankind has so refused His love. For the next hour, we wept together… me, profusely begging His forgiveness for my and our collective failure to love Him in return… and He, because humanity has now unleashed a Storm of its own making.

When they sow the wind, they shall reap the whirlwind. (Hos 8:7)

The next day, this message came to me, which we posted on Countdown:

We — my Son and this Mother — are in mourning over the suffering of those who are undergoing what will spread to the rest of the world. People of my Son, do not retreat; offer up all that is within your reach for all humanity. —Our Lady to Luz de Maria, February 24th, 2022

At the end of that time of prayer, I sensed Our Lord asking me, and us, to make special sacrifices at this time for the world. I reached down and grabbed my Bible, and opened to this passage…

Now the word of the LORD came to Jonah … “Arise, go to Nin′eveh, that great city, and cry against it; for their wickedness has come up before me.” But Jonah rose to flee to Tarshish from the presence of the LORD…

But the LORD hurled a great wind upon the sea, and there was a mighty tempest on the sea, so that the ship threatened to break up. Then the mariners were afraid, and each cried to his god; and they threw the wares that were in the ship into the sea, to lighten it for them. But Jonah had gone down into the inner part of the ship and had lain down, and was fast asleep…. (Jonah Ch. 1) 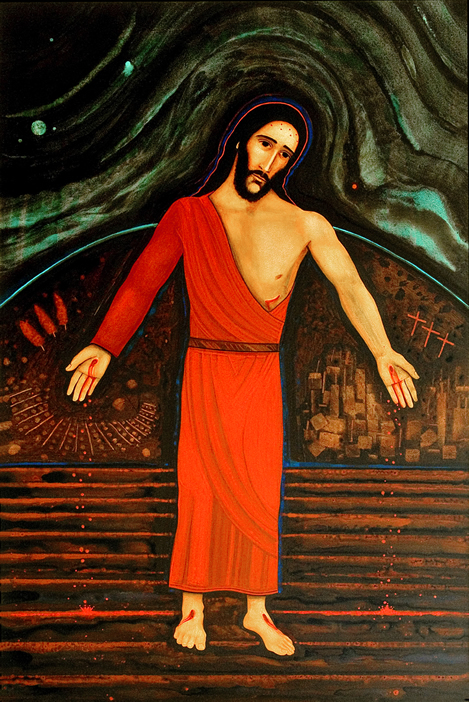 It is no surprise what the pagan sailors on the ship did in their anguish: they turned to false gods, casting aside the essential in order to “lighten” their load. So, too, in these days of distress, many have turned toward false gods in order to find comfort, to placate their fears and assuage their anxiety — to “lighten the load.” But Jonah? He simply tuned out the voice of the Lord and slumbered as the storm began to rage.

It’s our very sleepiness to the presence of God that renders us insensitive to evil: we don’t hear God because we don’t want to be disturbed, and so we remain indifferent to evil… a certain callousness of the soul towards the power of evil… The sleepiness’ is ours, of those of us who do not want to see the full force of evil and do not want to enter into His Passion.” —POPE BENEDICT XVI, Catholic News Agency, Vatican City, Apr 20, 2011, General Audience

The “Passion” Jesus is asking foremost of Our Lady’s Little Rabble is the sacrifice of obedience.[1]“Obedience is better than sacrifice”, (1 Sam 15:22) “Whoever loves me will keep my word,” Jesus said.[2]John 14:23 But even more, it is to make the sacrifice of things that, in themselves, are not evil, but which we may remain attached to. This is what fasting is: renouncing a good for a higher good. The higher good God is asking right now, in part, is for the salvation of souls who are on the brink of being eternally lost in the blink of an eye. We are being asked to become little “victim souls” — like Jonah:

…Jonah said to them, “Take me up and throw me into the sea; then the sea will quiet down for you; for I know it is because of me that this great tempest has come upon you.” …So they took up Jonah and threw him into the sea; and the sea ceased from its raging. Then the men feared the LORD exceedingly…. (Ibid.)

Today, the Great Storm has begun passing over the world as we are literally watching the “seals” of Revelation unfold before our eyes.[3]cf. It’s Happening In order to bring about a “calm” upon the sea, the Lord is asking us to reject the god of comfort and become protagonists in the spiritual battle being waged around us.

As I thought about what the Lord was asking of me personally, I protested at first: “Ah Lord, you’re asking me to do a violence to myself!” 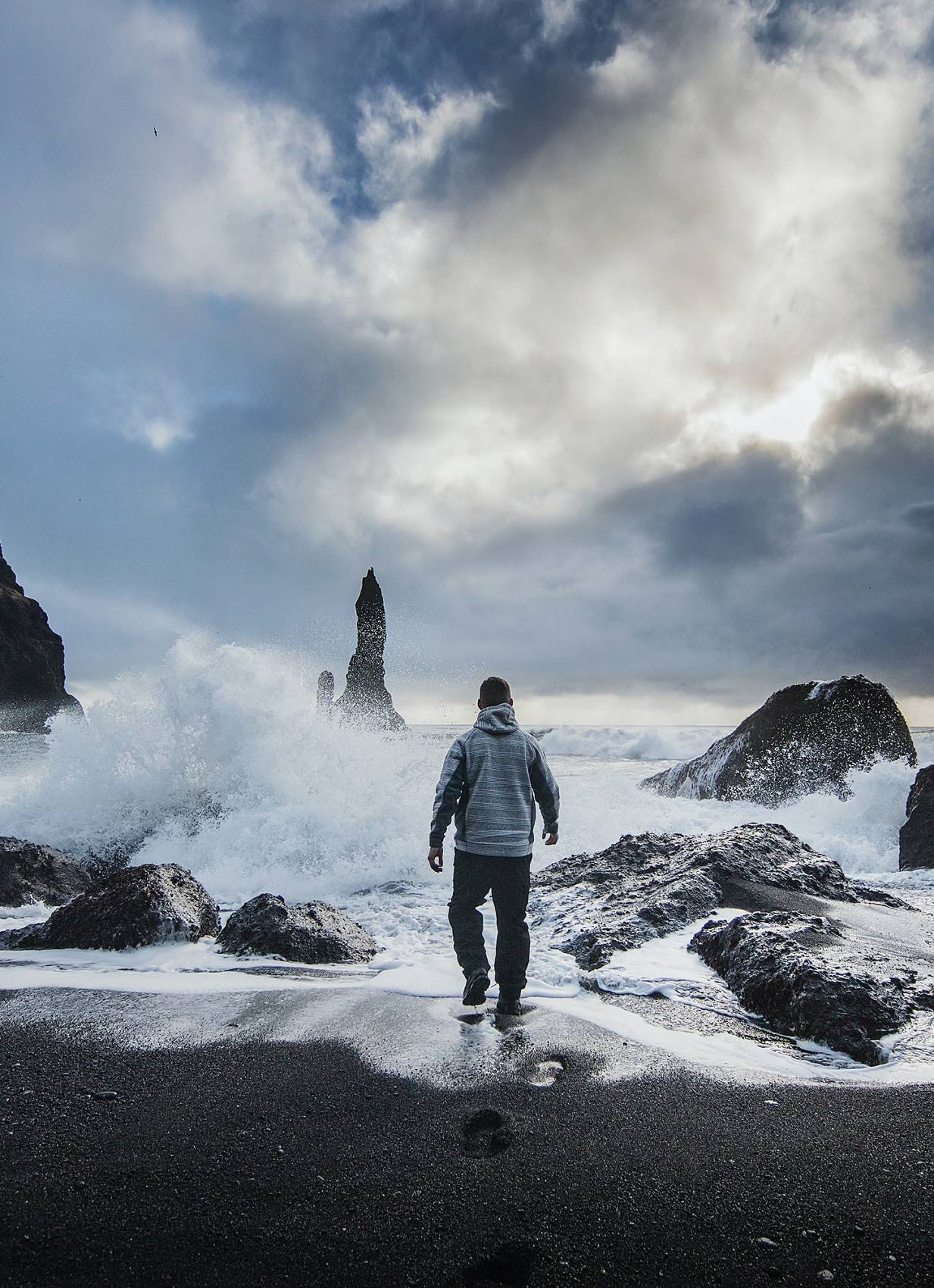 From the days of John the Baptist until now, the kingdom of heaven suffers violence, and the violent are taking it by force. (Matt 11:12)

It is a violence against my human will in order that the Divine Will may reign in me. Jesus said to Servant of God Luisa Piccarreta:

All the evil in man is that he has lost the seed of my Will; therefore he does nothing but cover himself with the greatest crimes, which degrade him and make him act like a madman. Oh, how many follies they are about to commit!… men are about to reach the excesses of evil and do not deserve the Mercy which flows upon them when I come and let you share in my pains, which they themselves inflict upon Me. You must know that the leaders of the nations are conspiring together to destroy the peoples and to plot troubles against my Church; and to obtain the intent, they want to use the help of foreign powers. The point in which the world finds itself is terrible; therefore pray and be patient. —September 24th, 27th 1922; Volume 14

It is natural for us to resist this word and even feel sad — like the rich man in the Gospel who was asked to sell his possessions. But in truth, after I gave my fiat to the Lord again, I literally felt the sea of my passions begin to calm and a new strength rise up in me that was not there before.

So again, there is a two-fold purpose to this “yes” to being a little victim soul for Jesus (I say “little” because I am not referring to mystical experiences or the stigmata, etc.). It is, first of all, to offer our sacrifice for the conversion of souls. Many today are simply not prepared to face their judgment, and we need to quickly intercede for them.

Two-thirds of the world is lost and the other part must pray and make reparation for the Lord to take pity. The devil wants to have full domination over the earth. He wants to destroy. The earth is in great danger… At these moments all humanity is hanging by a thread. If the thread breaks, many will be those who do not reach salvation… Hurry because time is running out; there will be no room for those who delay in coming!… The weapon that has the greatest influence on evil is to say the Rosary… —Our Lady to Gladys Herminia Quiroga of Argentina, approved on May 22nd, 2016 by Bishop Hector Sabatino Cardelli

Just as the storm calmed when Jonah offered himself in sacrifice, so too, the sacrifice of the remnant is essential to the “calm” of the sixth and 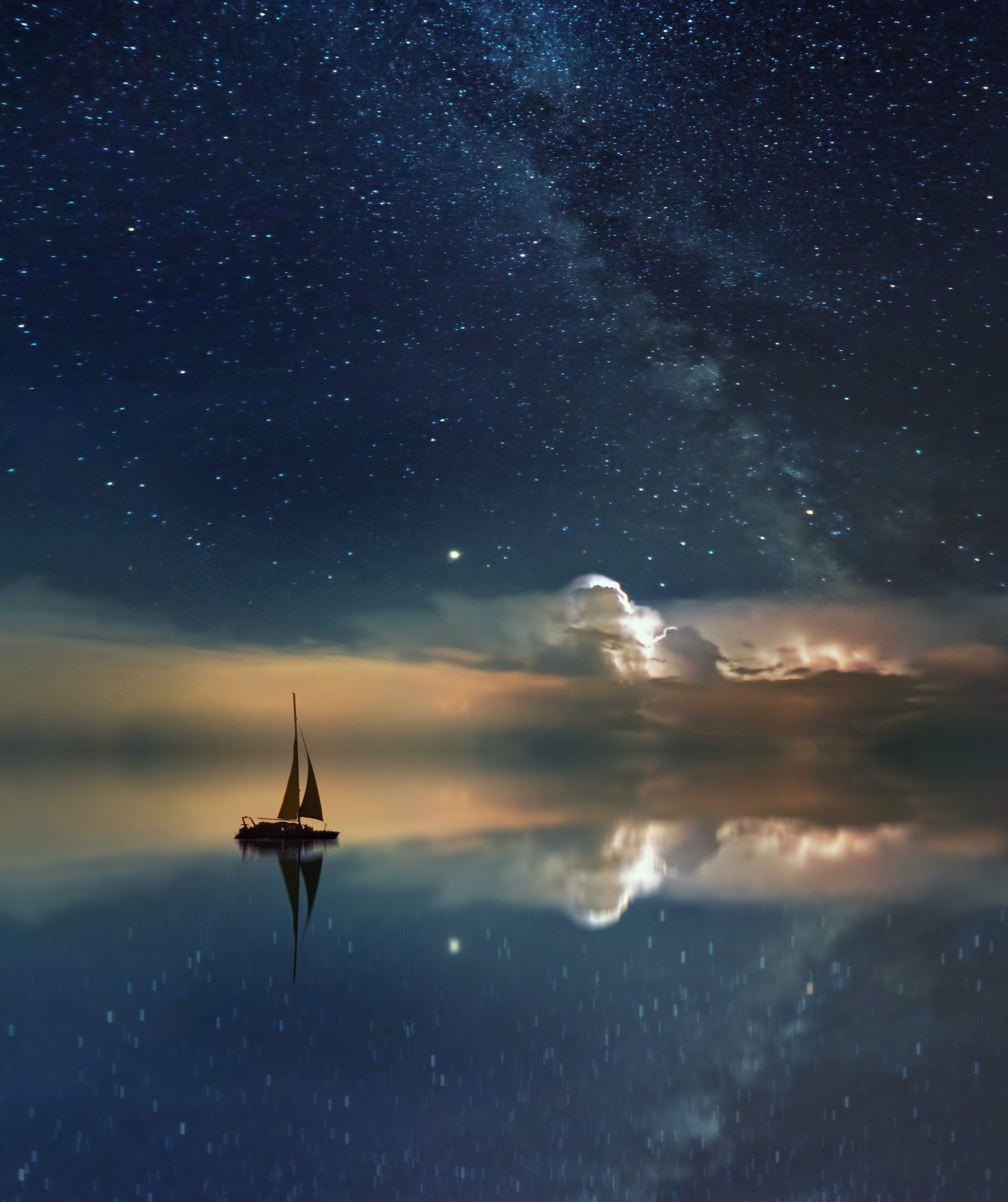 seventh seal of the Book of Revelation: the Eye of the Storm.[4]cf. The Great Day of Light; see also the Timeline During that brief reprieve in the Storm, God is going to give souls — many who are caught in the vortex of Satan’s lies and strongholds — a last chance to return Home before The Day of Justice. Were it not for the coming Warning, many would be lost to the deceptions of the Antichrist that have already blinded large portions of mankind.[5]cf. The Strong Delusion; The Coming Counterfeit; and Antichrist in Our Times

The second aspect of this renunciation — and it is exciting — is to prepare ourselves for the graces that will descend through the Warning: the beginning of the reign of the Kingdom of the Divine Will in the hearts of those giving their “fiat”.[6]cf. The Coming Descent of the Divine Will and Our Lady: Prepare – Part I

All are invited to join my special fighting force. The coming of my Kingdom must be your only purpose in life. My words will reach a multitude of souls. Trust! I will help all of you in a miraculous way. Do not love comfort. Do not be cowards. Do not wait. Confront the Storm to save souls. Give yourself to the work. If you do nothing, you abandon the earth to Satan and to sin. Open your eyes and see all the dangers that claim victims and threaten your own souls. —Jesus to Elizabeth Kindelmann, The Flame of Love, pg. 34, published by Children of the Father Foundation; Imprimatur Archbishop Charles Chaput

Take the time on this vigil of Lent to ask yourself the question: what is the biggest comfort in my life that has become an idol? What is the little god that I am reaching for in the daily storms of my life? Perhaps that is a good place to start — taking that idol, and casting it overboard. At first, you may feel fear, sadness, and regret as you enter the tomb to be stripped of your human will. But God won’t let you down for this heroic act. Like Jonah, He will send a Helper to carry you to the shores of freedom where your mission will continue, united to Christ’s, for the salvation of the world.

Out of my distress I called to the LORD, and he answered me…
When I became faint, I remembered the LORD;
my prayer came to you in your holy temple.
Those who worship worthless idols abandon their hope for mercy.
But I, with thankful voice, will sacrifice to you;
what I have vowed I will pay: deliverance is from the LORD.

Then the LORD commanded the fish to vomit Jonah upon dry land. (Jonah Ch. 2)

And with that, Jonah once again became the instrument of the Lord. Through his fiat, Nineveh repented and was spared…[7]cf. Jonah Ch. 3

I feel the Lord is asking us to offer our prayers and sacrifices especially for our priests. In a sense, the silence of the clergy during the past two 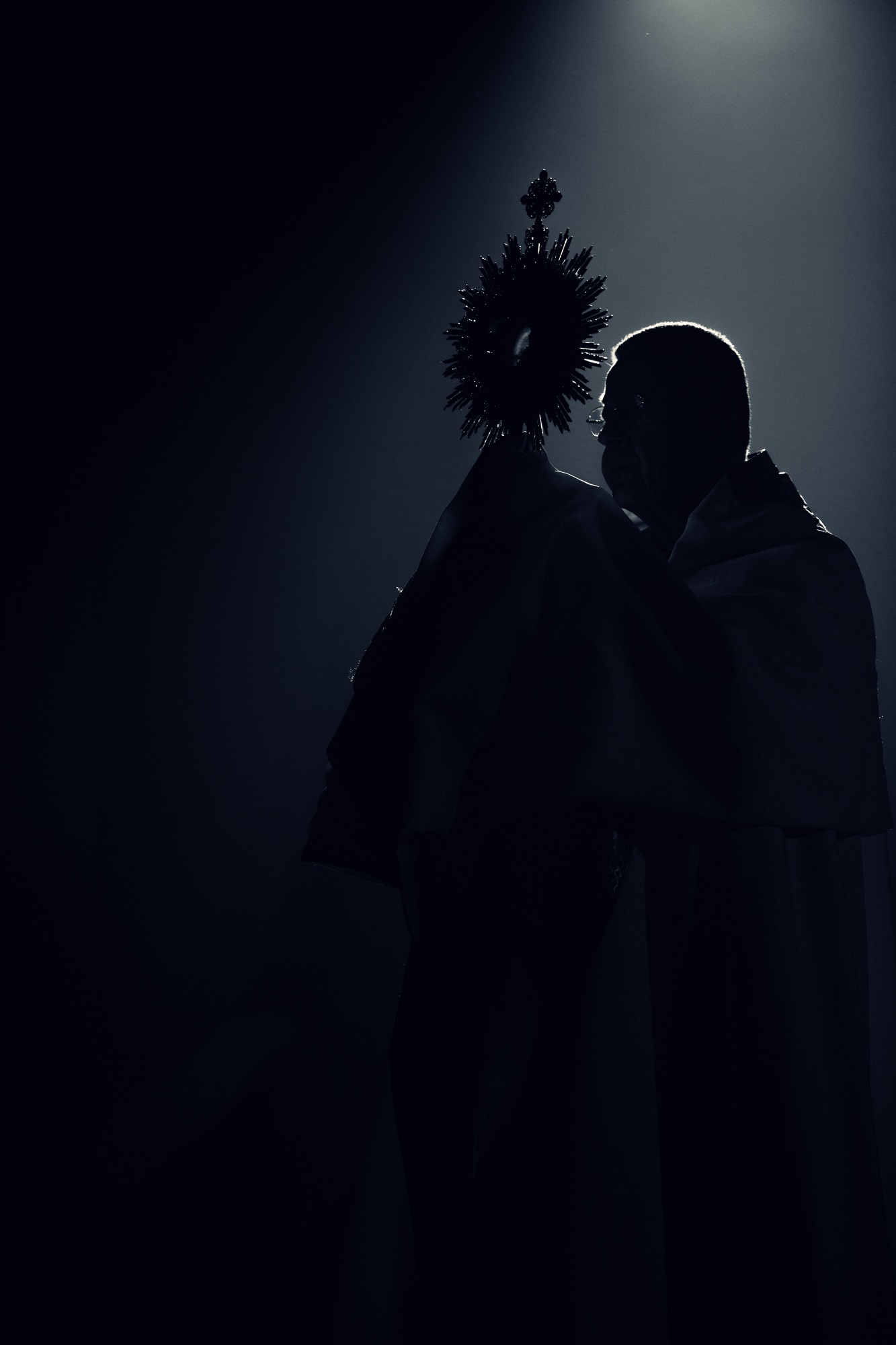 years is akin to Jonah hidden away in the stern of the ship. But what an army of holy men are about to awaken! I can tell you that the young priests I know are stirring and preparing for battle. As Our Lady has said repeatedly over the years:

We have this time that we are living in now, and we have the time of the Triumph of Our Lady’s heart. Between these two times we have a bridge, and that bridge is our priests. Our Lady continually asks us to pray for our shepherds, as she calls them, because the bridge needs to be strong enough for all of us to cross it to the time of the Triumph. In her message of October 2, 2010, she said, “Only alongside your shepherds will my heart triumph.” —Mirjana Soldo, Medjugorje seer; from My Heart Will Triumph, p. 325

See: Priests, and the Coming Triumph

The Voids of Love