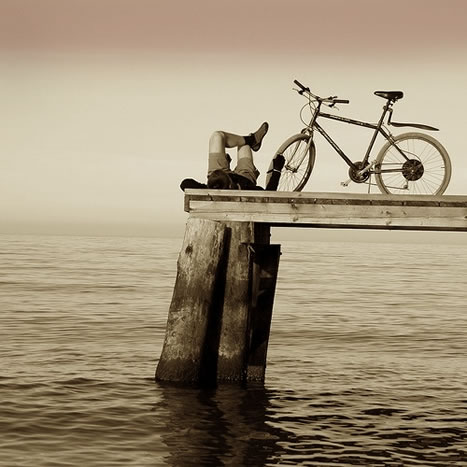 MANY people define personal happiness as being mortgage free, having plenty of money, vacation time, being esteemed and honored, or achieving big goals. But how many of us think of happiness as rest?

The need for rest is inscribed into all of creation in nearly every facet of life. Flowers fold up in the evening; insects return to their nests; birds find a branch and fold their wings. Even animals that are active at night rest during the day. Winter is the season of hibernation for many creatures and rest for the soil and trees. Even the sun cycles through periods of rest when sun spots become more inactive. Rest is found throughout the cosmos as a parable pointing to something greater. [1]cf. Rom 1:20

The “rest” that Jesus promises in today’s Gospel is different than dormancy or sleep. It is the rest of true interior peace. Now, most people would find it very difficult to rest standing on one leg, which would soon become tired and aching. Likewise, the rest that Jesus promises requires that we stand on two legs: that of forgiveness and obedience.

I remember reading of a police investigator who said that unsolved murder cases were often left open for years. The reason, he said, is because of human’s insatiable need to tell someone, anyone, of their sins… and even hardened criminals slip from time to time. Likewise, a psychologist, who was not Catholic, said that all therapists often try to do in their sessions is to get people to unload their guilty consciences. “What Catholics do in the confessional,” he said, “is what we try and get patients to do in our offices, as that is often enough to begin the healing process.”

Go figure…. so God knew what He was doing when He gave His Apostles authority to forgive sins. Those who say the confessional was the Church’s means to manipulate and control people “in the dark ages” through guilt, are really just side-stepping the reality in their own hearts: the need to be forgiven. How often has my own soul, wounded and stained by my failures and faults, been given “eagles’ wings” through the Sacrament of Reconciliation! To hear those words from the priest’s mouth, “…may God grant you pardon and peace, and I absolve you from your sins….” What a grace! What a gift! To hear that I am forgiven, and my sins forgotten by the Forgiver.

But there is more to God’s mercy than forgiveness. You see, if we feel that we are only loved by the Lord if we go to Confession, then there really is no true rest. Such a person is anxious, scrupulous, afraid to step to the left or right for fear of the “wrath of God.” This is a lie! This is a distortion of who God is and how He looks upon you. As it says in the Psalm today:

Did you read my testimony yesterday, the story of a young Catholic boy, raised in the faith, who was even a spiritual leader among his peers, who by the time he was eighteen had been given a rich spiritual heritage…? And yet I was still enslaved by sin. And do you see how God treated me, even then? As much as I deserved “wrath”, instead, He wrapped me in His arms.

What will really bring you rest is faith and trust that He loves you in your weakness. That He comes looking for the lost sheep, He embraces the sick, He dines with the sinner, He touches the leper, He converses with the Samaritan, He extends paradise to the thief, He forgives the one who denies Him, he calls into mission the one who persecutes Him… He lays down His life precisely for those who have rejected Him. When you understand this—no, when you accept this—then you can come to Him and begin to rest. Then you can begin to “soar as with eagles’ wings…“

However, if we abuse the confessional like a shower, with little effort to avoid getting muddy again, then I would say you “don’t have a leg to stand on.” For the other leg that supports our interior peace, our rest, is obedience. Jesus said “Come to me” in the Gospel. But He also says,

Take my yoke upon you and learn from me, for I am meek and humble of heart; and you will find rest for yourselves. For my yoke is easy, and my burden light.

The “yoke” of Christ is His commandments, summarized in love of God and neighbour: the law of love. If forgiveness brings us rest, then it only makes sense that avoiding that which brought me guilt in the first place, continues that rest. There are many false prophets in our world, even within the Church, who wish to obscure and change the moral law. But they are only covering over the pit and snare that traps people in interior restlessness, sin, which disturbs the soul and robs one of peace (the good news is that, if I do sin, I am able to lean on the other leg, so to speak.)

But the commandments of God will not mislead, but rather lead you to abundant life and freedom in the Lord. David exclaims in Psalm 119 the secret of his joy and interior peace:

Your law is my delight… How I love your law, Lord!… I keep my steps from every evil path… How sweet to my tongue is your promise… Through your precepts I gain understanding; therefore I hate all false ways. Your word is a lamp for my feet, a light for my path. (vs. 77, 97-105)

God’s law is a “light” burden. It is a burden because it implies duty. But it is light, because the commandments are not difficult, and in fact, bring us life and reward.

Because you are loved, you are called to love. These are the two legs upon which stands your rest, your peace… and the grace to not only walk, but run toward eternal life.

They that hope in the LORD will renew their strength… They will run and not grow weary, walk and not grow faint. (Isaiah 40)